hide
hide
No announcements have been posted yet for Independence Pickleball (IPBC).

What a weekend for all who went to play at the Arnold Festival this past weekend. For some it was a new adventure of not only playing and watching pickleball with some of the finest players in the country but bringing home a Medal too.  The festival was filled with all sorts of fitness and sport spectactulars from Archery, Fencing, Pole Fitness and of course this years addition Pickleball. Thousands of people descended on to the Columbus seen. The tournament was set up in the BUCKEYE Building on the OHIO STATE EXPO fair grounds.

Lighting was not so great, the surface was smooth cement and their were several ceiling obstuctions to deal with but the nine courts that were set up were ready for all to play on.

A few snags during the tournament held up and delayed some games by not having enough volunteer officials for the games.. So if you don't want to play in a tournament you can always learn to ref and see some great play and be involved that way too.

The weather canceling flights for people coming in to play too. Yes, the tourney had players from FLA, TN, PA, TX and more. At the 5.0 level were some of the best players in the country playing for the GOLD as well.  A 4.0 level 12 and 14 year old brother/sister doubles team from FLA  came with there parents who also are ranked as 5.0 players. A real family affair.

Our Group of 10 players and 3 AWESOME weekend supportors went to show what we had to the Pickleball world. Thanks Randy, Janet and Laksmi, you really were awesome and greatly appreciated.

With great effort, style and spectacular plays we were everywhere. From sliding saves to unreturnable smashes everyone gave a great showing of the talent in our area.

Medals were won in several levels:

2.5 Men's Singles GOLD was handed to Jimmy T and the SILVER to Chandran T.

2.5 Women's GOLD was won by Laura E and taking the SILVER was Claudia F.

What a great experience for everyone who was able to compete. For almost all of us it was our first exposure to this type of tournament play and definately our first Pickleball exposure. I don't think it will be our last and I really think people will be hearing about the NEO play soon.

I plan on trying to post some videos and pictures so keep watching for it.

Great job to everyone who went and THANK YOU to all the well wishers on their support of our efforts. Next time join us to play  or just go and watch some great pickleball.

GO to USAPA.org for Upcoming Tournaments Get on board the Pickleball train 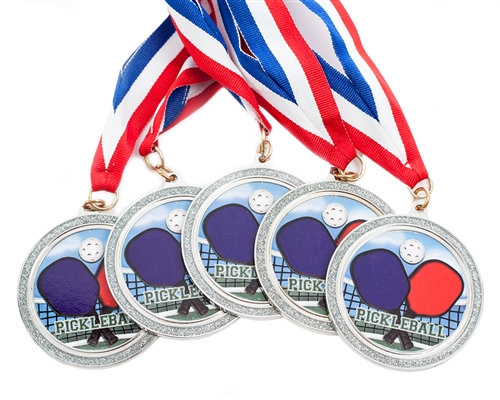 In this game all play is made in the NVZ.  Great drill for DINKING practice.

Service starts at the EVEN side cross court to opponents NVZ and play as in regulation.

ALL balls must land in the NVZ to score or side-out.

BE CAREFUL high volleys could be OUT.

What's in your bag?

What's in your bag?

Besides your paddles and good pair of court shoes consider the following.

**HAVE A MEDICAL ISSUE such as Diabetes, Seisure Disorder, Heart condition. Have extra medication available JUST in case and TELL someone what do BEFORE hand and how to administer them IF needed..

**Small towel for those sweaty momements

**Small pack of tissue or a few single ones

**Joint braces or Ace bandages for support if you need them

*Cooling towel. Stays wet and great for those HOT days

*Cap or visor for those sunny days

You may not need any of these items but be the girl or boy scout and ALWAYS be prepared. You may just be the one to save the day. Most of the small items can fit into a ziplock baggie.

Don't hope someone else has it.. BE PREPARED.

Please consider joining me and my family in the

This race is in honor a woman who not only was my big sister but an exceptional educator in the the Independence School system. This is the 13th Annual Race in her memory to support the Scholarship in her name as well as part of the outdoor Educational program at the school.

Renee was a sister, a mentor, an athlete, a teacher,  a mother, and a  great friend to both her students and members of the community. She lived to the fullest and always gave of herself for others.

So please join us in honoring her memory on May 2 at the Independence Elmwood Park for a walk or a jog..

If you can't make the race and would like to contribute to the cause please contact me for more information on how you can donate.

I know if she were still here she would LOVE pickleball and would be really good at it too.

PETS ARE WELCOME TO JOIN on a leash of course.

Dink and Volley without a partner

Open area 8' x 8' space with a flat surfaced wall to hit against. Draw a line or tape a "net" line on the wall to simulate net height. Draw a NVZ line 7' from the wall. Have one or two balls available.

Standing in a compressed "ready" position behind the drawn NVZ line away from a wall, player will continuously tap or dink the ball to a target area above net height. Ball will bounce softly to wall and back to floor as player continues to use a squat lifting action with the legs and a firm but gentle lifting action with the paddle.

Ball shall bounce to wall and drop short of the drawn NVZ line.

Player will use various paddle positions for attack: open forehand lift, open backhand lift, a 'scoop' lift from directly in front of the body,

Player will repeat this action for a timed period and/or a set amount of repetitions.( ie. 10 backhand, 10 forehand)

Stay in 'Ready' position and in a compressed squat position low to net height.

Hit ball and RETURN paddle back to PADDLE READY position. (paddle facing flat to net in front of chest) This is important to be READY for the next attack.

Work to have ball bounce in the NVZ before returning

Stay on your toes and stay in motion

1. Start with hits that return SHORT of the NVZ line or as close to wall as possible. Player will need to step into the NVZ. Be sure to ANCHOR the base foot behind the NVZ. Step in with the non anchored foot, play the dink and return to paddle READY position behind the NVZ line with shoulders and hips square to net. REPEAT this for ALL shots in front of the body and both forehand and backhand shots

2. Hit a bit harder so that the return bounce is closer to the NVZ line and your feet.

a. Short hop the return without a step or

b. Drop step to make the return with a forehand or backhand

3. VOLLEY shots. Repeat this series only hit the ball slightly harder and VOLLEY the ball without a bounce back to the wall so that the ball clears just above the net. Again be sure to stay on the balls of your feet, balanced and in READY position. Hold your ground and stay balanced as you reach into the NVZ to receive any ball that is playable on a volley shot.

Be ready to drop step if needed to either side.

Consistency in 80% or better of your shots.